A background to the industry 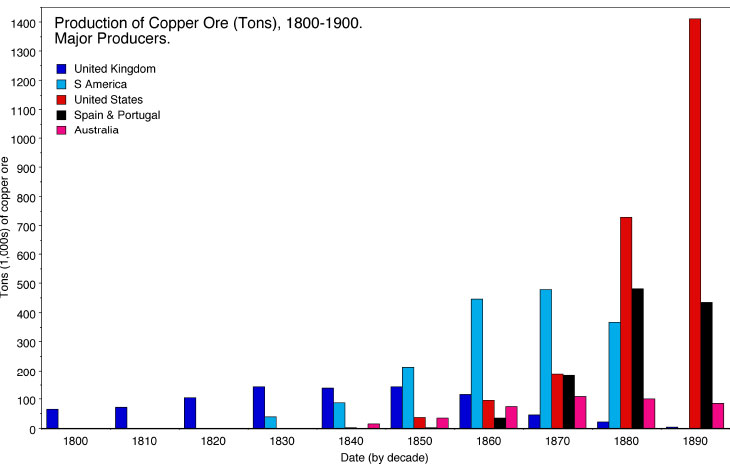 While the United Kingdom, and particularly Cornwall, led the World in copper production from 1800 to the 1840s, South American and the United States surged ahead in the 1850s and 1880s respectively. This competition spelled the end of the copper mining boom in Cornwall and West Devon. By comparison, Australia was never able to reach the levels of production achieved by other major producers.

The establishment of the Australian copper mining industry principally depended upon Cornish mining expertise as well as Welsh smelting technology. This specialisation had arisen because of the location of abundant ores in Cornwall and West Devon, while the closest available supply of plentiful coal for smelting purposes was located in South Wales, in the Swansea District.

“Tin mining in Cornwall started very many centuries ago and survives today; copper mining by comparison was short-lived, being virtually unknown before 1700 and virtually extinct by 1900. Yet in these two hundred years the red metal far surpassed tin in value and tonnage, and for the century from 1750 to 1850 it is fair to say that Cornwall’s prosperity or otherwise was based first and foremost on copper…As an industry it rose and fell swiftly, and the great exodus of miners in the latter half of the nineteenth century took place as a direct result of the collapse of the great copper mines in the 1860s.

…free-trading Cuban and Chilean copper, richer by far than even the most resplendent purple and yellow ore ever raised in Gwennap, had cast its looming shadow over Cornwall by 1840, and things were never to be the same again. Another quarter of a century, and the unbelievably massive copper finds in South Australia and Michigan beat the Cornish industry to its knees and, not many years thereafter, to its death.”
(D. B. Barton. A History of Copper Mining in Cornwall and Devon. D. Bradford Barton Ltd. Truro. Second Edition. 1968: 7-8).

While tin was obtained from alluvial workings from prehistoric times in Cornwall, it was not until the 1580s that the first recorded exploitation of copper resources was reported in England.