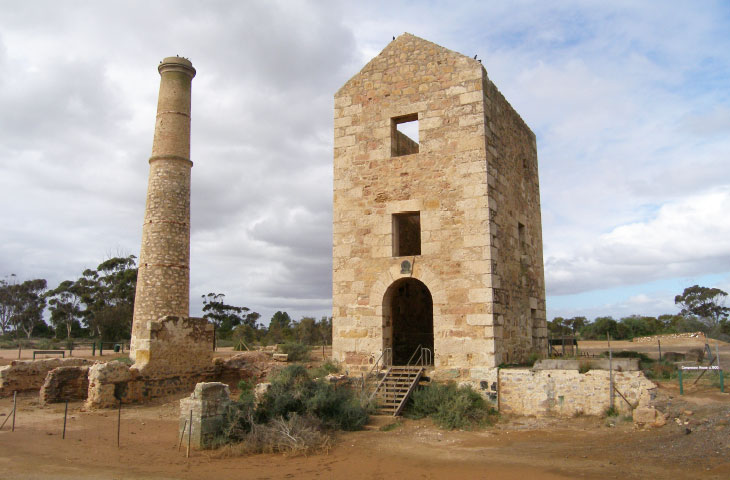 Hughes Engine, manufactured in Cornwall in 1862 by Harvey & Co, and erected in 1865, served the Moonta Mines for 58 years. The adjacent boiler house was originally designed for three Cornish boilers (Edward Higginbotham, 2006).

Deposits of copper were located on the Yorke Peninsula by a shepherd in 1859. W. W. Hughes and J. Duncan, the pastoral leaseholders, purchased the mineral leases and formed the Wallaroo Mining Company in 1860, bringing a team of miners from Burra to start work.

In 1861 a second major find was reported and the mining lease also secured by Hughes, who formed the Moonta Mining Company. After both the Wallaroo and Moonta discoveries, there was a rush to purchase other leases in the area and numerous other companies were formed.

The Wallaroo and Moonta mines were run as separate enterprises until 1889-1890.

Production in the 1860s was highly profitable, reaching 26,000 tons of ore by 1869. Peak production was reached between 1870 and 1875, when the workforce numbered over a thousand. Higher extraction costs and lower copper prices forced the company to largely suspend working in the late 1870s, when about 350,000 tons of ore at 10% copper had been mined.

Both mines suffered from depressed conditions in the late 1870s and 1880s. They were amalgamated in 1889-1890 as the Wallaroo and Moonta Mining and Smelting Company. Thereafter underground production from the Moonta mines became limited to the higher levels, with materials and labour being transferred to Wallaroo. Both mines were modernised, though Wallaroo became the focus of activity.

Full production continued up to and including the First World War, but reduced copper prices in the post war era forced the mines to close in 1923. Small scale mining operations continued at Moonta until the 1940s. By 1923, Moonta and Wallaroo had produced 350,000 tons of copper to the value of £20.4 million.

During the lengthy mining period, Wallaroo became the seaport for the local mining industry. A pier and tramroad to the mines were constructed in 1861, along with a smelting works. The town of Wallaroo took on a distinctive Welsh character, with Gaelic being spoken by the smeltermen and their families for many years. The works smelted the ores from both the Wallaroo and Moonta mines from 1861 through to their closure in 1923. The Welsh reverberatory furnaces were constructed in 1861 under the supervision of Leyshon Jones, who had worked at both Kapunda and Burra. The works was the largest outside Swansea, producing up to 100 tons of refined copper per week by 1868. In 1865 the furnaces were converted to use coal, shipped from Newcastle in New South Wales. Low grade ores were back loaded to Newcastle, where the company erected smelters, which remained in operation until 1893.

With the formation of the amalgamated mining company in 1890, the smelting works was modernised and also diversified for a short period into the refining of gold, silver and lead, as well as copper precipitation. From 1910 modern methods of smelting were introduced using the Bessemer process.

The most distinctive of the areas of Cornish settlement is located in the vicinity of the Moonta mines, with several non conformist chapels, miners cottages and the Moonta Mines School still extant. This landscape was noted as early as 1899 in a newspaper report:

“From the bob-platform of Prankerd’s engine house, which is near the centre of the mines, a very comprehensive view can be obtained. Among the smaller houses of the miners can be distinguished sixteen churches and one building which has been a church. All or them are large, comfortable buildings, the Wesleyans, Primitive, and Bible Christians being the only denominations represented on the Mines, with the exception of he Salvation Army.” (Oswald Pryor. Australia’s Little Cornwall. 1962, reprinted 1989, National Trust, Moonta Branch. 99).

By the end of mining in 1923, three generations of Cornish and Welsh had worked at Moonta and Wallaroo. With the “scattering of the bal”, this community was dispersed, though Cornish traditions and the remnant landscape survive.