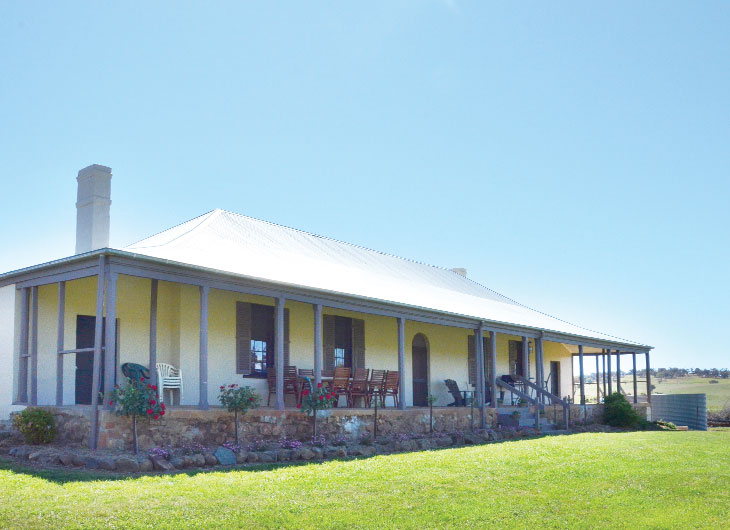 Of all the original improvements on the property, only the Old Errowanbang Homestead survives to the present day (Edward Higginbotham, 2010).

Gregory Blaxland, William Charles Wentworth and William Lawson found a route across the Blue Mountains in 1813 and were each rewarded by Governor Macquarie with grants of 1,000 acres. Lawson selected his land on the Campbell River near Bathurst and was one of the first to take stock over the Blue Mountains in 1815. Lawson was appointed as Commandant at Bathurst from 1819 to 1824 and during this time explored and opened up the area around Mudgee.

William Lawson became one of the largest landholders to the west of the Blue Mountains, owning a chain of properties. He took up Errowanbang immediately after the area was opened up in 1826. He built the homestead there in 1827 for his son, William Lawson, junior. The homestead survives, but without its original servants wing and kitchen, overlooking the broad river flats along Flyers Creek. The original woolshed, built of bush timbers, 120 feet long by 40 feet wide, was destroyed in 1967, but was believed to be one of the earliest in the area.

William Lawson, senior, died on 16 June 1850. He was followed by his son, William Lawson, junior, who died on 2 February 1861. The property remained in the family until sold to Alexander Wilson and Francis Rawdon Chesney Hopkins between 1886 and 1890. Wilson was declared bankrupt in 1894, but Hopkins retained the eastern part of the property until his death in 1916. The western half of the property on Panuara Creek was sold. The old homestead and neighbouring land passed into the hands of George H. Hebden and Charles S. B. Hebden in 1897.

Wilson and Hopkins also had interests in gold mining at Blayney and Wire Gully. The workings at Wire Gully lay within the boundaries of Errowanbang at this time and the gold was brought back to the old homestead for weighing.

Wilson and Hopkins also constructed the second, much larger woolshed in about 1890. Built in a cruciform pattern, the shed is a two-storey structure, built into the hill slope, with shearing, sorting and storage being completed over four different levels. Architect designed, the building originally had 40 manual stands for shearers, of which only 8 have been converted to mechanical shearing. Hopkins hoped to shear up to 100,000 sheep, but the record was 90,000 in any one year. The footings of the shearers’ quarters, wash rooms and mess shed are located nearby. The shearing shed is listed on the State Heritage Register.

In the 1840s the landholding at Errowanbang comprised more than 22,000 acres between Flyers Creek on the east and Panuara Creek on the west. The estate was later extended to the east of Flyers Creek onto what had been Church and School land. George and Charles Hebden still owned 23,500 acres in 1909, running 301 cattle and 37,033 sheep. By 1924 the property (Errowanbang Pty Ltd) was reduced to 9,040 acres, running 300 cattle and 13,528 sheep.

The remaining property was resumed in 1951 under the War Service Land Settlement Scheme and was subdivided into eleven blocks. There were 1,337 applications for 8,973 acres of land with the successful applicants drawn by ballot. The old homestead block was allotted to J. W. Harries, Llanover Downs, Balranald. Of the other ten blocks, Wire Gully was allotted to F. A Press, c/o Waterford and McFarlane, Coonamble. The size of the blocks, varying from 826 to 1,038 acres, was an acknowledgement of the land necessary for a viable farm, rather than the small acreages of earlier forms of closer settlement.