History.
The area to the west of the Scottish Australian Mining Company was declared a Common in 1866, after a successful petition signed by many of the Cadia residents. The Common was revoked on 10 March 1879 and Henry Hunt was one of a number of Cadia residents to take up land under the Conditional Purchase arrangements of the Crown Land Alienation Act, 1861. He applied for Portion 84, on the west bank of Cadiangullong Creek on 24 April 1879.

Henry Hunt was born at Morpeth in 1847. His family arrived in Orange in 1858. Henry became an expert in gold mining prospects and befriended William Tom, a prominent member of the Cornish Settlement at Byng. Henry married Jane Coppock at Springfield near Cadia in 1866 and the couple brought up a large family at Cadia. He was also one of the Cadia community to sign the petition for the Common in 1866.

In 1879 Hunt gave his occupation as storekeeper at Cadia. By 1881 he was indebted to Nelson Brothers of Orange for £200 probably for stock and was forced to mortgage his land. By this time he had built two houses and a stockyard on his farm, with land in cultivation, all valued at £150. Hunt remained as storekeeper and postmaster at Cadia until 18 April 1883. In 1884, “M. Hunt” was listed as owning 100 acres, along with three horses and three pigs. Jane Hunt may have supplemented the family income as a midwife in Cadia, as she was witness to many of the registrations of birth.

Hunt was not able to pay off this debt to Nelson Brothers and forfeited his land in c.1888, moving to Orange. He also had an extensive involvement with the goldmines at Lucknow. Like other Cadia storekeepers, Hunt found that storekeeping brought losses, though he was not declared bankrupt like some others before and after him.

Adolphus Judd was born at Braidwood in 1859 and married Mary Louisa Jenkins at Orange in 1878. Through his business as a carrier and farmer, he was able to take up land under Conditional Purchase. He sold several portions in 1889 for £250, then purchased Portion 84, taking out a mortgage of £225 to do so. Judd and his family continued in occupation until 1902, when they sold the property to Luke James Tompkin, storekeeper, Cadia, for £220.

Both Henry Hunt and Adolphus Judd has managed to live on this land, because they both had income from other sources. The land itself could not provide an adequate income, as indicated by the small quantity of stock that Hunt possessed.

All the surrounding land had been swallowed up into larger, more economic holdings by 1906. Portion 84 remained as a separate holding until 1929, because of the special role it played for Cadia Village. It became the site of a slaughterhouse, supplying fresh meat to the storekeepers of the Village.

Luke Tompkin and his wife, Sarah, arrived in New South Wales on the Abergeldie in 1884. They were in the Orange area by 1885 and by 1894 he became the local storekeeper. From 1901-1909 Tompkin was listed as both storekeeper and butcher at Cadia, no doubt reflecting the relationship with the slaughterhouse on Portion 84.

Patrick Tynan and his wife, Mary, had arrived at Cadia in 1906, becoming storekeepers in the Village as the second mining boom brought the community to life again. In 1909 Patrick Tynan was listed as the licensee of the new Cadia Hotel on the main street. He died in 1912. Mary or her children continued the business at Cadia, both the hotel and the store or butcher. In 1926 the butcher’s shop was leased, together with Portion 84, with specific conditions on disinfecting both premises to ensure their cleanliness.

With the end of the mining boom in 1928, so the Village suffered a final downturn. The fortunes of the Village affected the viability of the slaughterhouse. Portion 84 was finally amalgamated into the surrounding farms in 1929.

Archaeology.
The site of Tynan’s Slaughterhouse was located during the survey of Tunbridge Wells in 1998. However it was not until the commencement of mining activities in January 2001 that the adjoining archaeological remains were located, including the site of a hut. Archaeological excavations were completed in May 2001.

This was the first excavation of a house site at Cadia. The unusual nature of the archaeological remains, especially when compared to excavations in urban areas, raised some difficulties for interpretation. The excavation of house sites in Cadia Village in late 2002 resolved many of the issues that arose on this site.

Three main structures were recognised, designated Buildings 1-3. Building 3 was the slaughterhouse. While only one post of this structure remained standing before excavation, the archaeology revealed the whole layout of the building, together with lean-to at the rear and stockyard at the front. The post-built structure had intervening wall slots, indicating a timber framed building, probably with slab walls. The structure measured 8.8 metres long by 4.3 metres long (29 feet by 14 feet) and was probably open on its east side, since there was no base plate along this side. The surviving corner post probably indicates that the height of the walls was 2.4 metres or 8 feet, a standard measurement.

The slaughterhouse was remarkably clear of artifacts and bone, possibly reflecting the stringent cleanliness that had to be maintained around a building of this type. The structure was separated from the domestic premises by a fenceline. Within this domestic area there was clear evidence of a small three-roomed building (Building 2) and then an area of rich humic topsoil, containing a large assemblage of artifacts, which was originally interpreted as Building 1. It looked very similar to the underfloor deposits that archaeologists find under historic buildings.

The later excavations of Cadia Village in 2002 revealed that house sites may leave little trace. This was especially the case with timber framed slab buildings, or Company housing for miners. Artifacts may also be hard to find within buildings, except for fireplaces. They were more common in cess-pits under outdoor toilets or in separate rubbish dumps.

With hindsight, Building 1 at Tynan’s could be reinterpreted as the rubbish dump for the two houses that Henry Hunt had built by 1881. Building 2 was one of these buildings, the other had been inadvertently destroyed by mining activity. While this was unfortunate, the archaeologists had been able to recover a large assemblage from the rubbish dump and could assess details of the standard of living of the houses’ occupants. The grid of irregular features under the rubbish dump can now be reinterpreted as evidence for ploughing, showing that the ground around the houses was tilled and enriched with household rubbish.

The artifact assemblage is dated from the 1860s through to the early twentieth century and is representative of the occupation by both Henry Hunt and Adolphus Judd with their families. The assemblage reveals that both families lived comfortably on limited means. When compared with the assemblages from Cadia Village, it can be seen that they occupy a position between the miners, who could not afford to own property, and the mine managers, storekeepers and publicans, who were able to purchase land and houses.

The occupants of the buildings ate an unusually large number of rabbits, some native animals and small amounts of beef or mutton, indicating a diet where economy was of necessity. There is clear evidence of women and children, and fortunately there is also evidence of literacy, in spite of the fact that Adolphus Judd was sometimes in arrears with school fees for his children at the Cadia Public School.

The evidence for the use of the slaughterhouse is elusive. One butcher’s hook and little bone is all that remains, except for a large quantity of medicinal or pharmaceutical bottles, which may relate to the cleaning of utensils for the slaughterhouse. 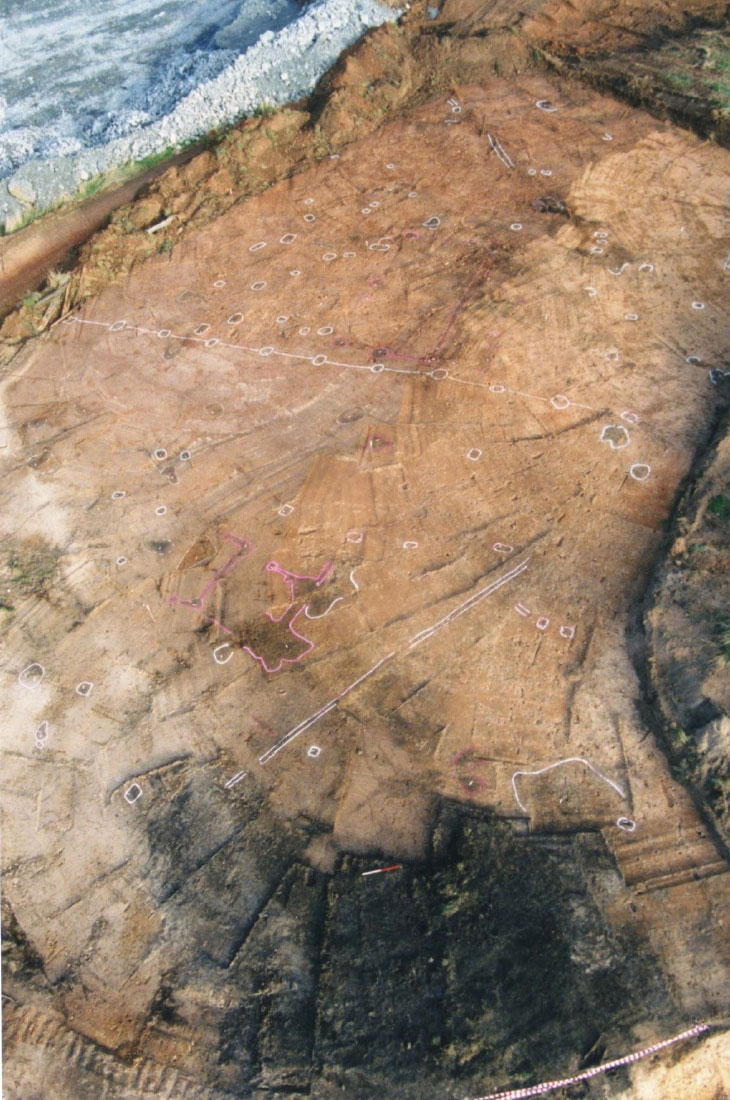 The archaeological site was opened up by machine under archaeological supervision, revealing all the features associated with the farm and slaughterhouse. The rubbish dump is clearly visible in the foreground and provided an assemblage of artifacts, which revealed the details of life on the farm. Survey paint was used to highlight the pits and post holes of the various structures. The archaeological plan reveals more details (scale 1 metre) (Edward Higginbotham, 2001).