Cadia Village – The Bon Accord Hotel. 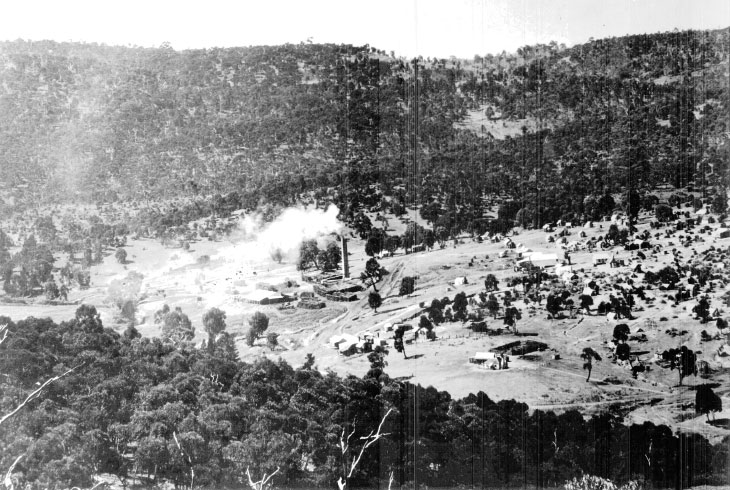 This photograph of Cadia Village from the south-west shows the potential site of the Bon Accord Hotel in the right foreground, with road access up to the buildings. The photograph shows the area was less developed in 1905-1907 than two years later).

Historical evidence.
The identification of the Bon Accord Hotel during the archaeological excavations in 2002 was made possible through bringing together all the strands of evidence. Its location is mentioned in Josiah Holman’s Report of 1868, when he refers to a quartz reef and the sinking of a shaft near Hick’s Hotel. This is almost certainly “Holman’s Reef”, as identified on the plan of 1881. The location of the shaft is identified as S010 on the excavation plan.

The hotel was unlikely to be located directly to the north of the mine shaft, because the buildings had already been identified as the Cadiangullong Store and associated shops. The only other likely contender was the building complex to the south of the shaft, seen standing in isolation in a photograph of 1905-1907. This was a double fronted cottage, with chimneys along its east wall, indicating rooms at the rear. Behind this cottage was a larger building with a verandah on its south side and a skillion on its east wall. The road access to this building, from the south-east and the north-east indicates it was a centre of activity.

Was this evidence confirmed by the archaeology?

Archaeological excavation.
Before excavation commenced, it was clear that substantial disturbance had taken place for the levelling of a mine exploration drill platform. When the topsoil had been stripped by machine for archaeological excavation, it was obvious that the hotel site had been completely destroyed, although ephemeral remains at the rear of the building were recognised as S005 on the excavation plan. All was not lost. The rubbish dump for the hotel was soon exposed and provided a large assemblage relating to the occupation of the building complex. The size of the assemblage suggests a high level of affluence, but only hints at the identification of the building as a hotel, with items like demijohns and higher frequencies of gin and schnapps consumption. The assemblage is similar to that recovered from the Cadiangullong Store and shops nearby, indicating that the building complex is likely to have had a commercial purpose. 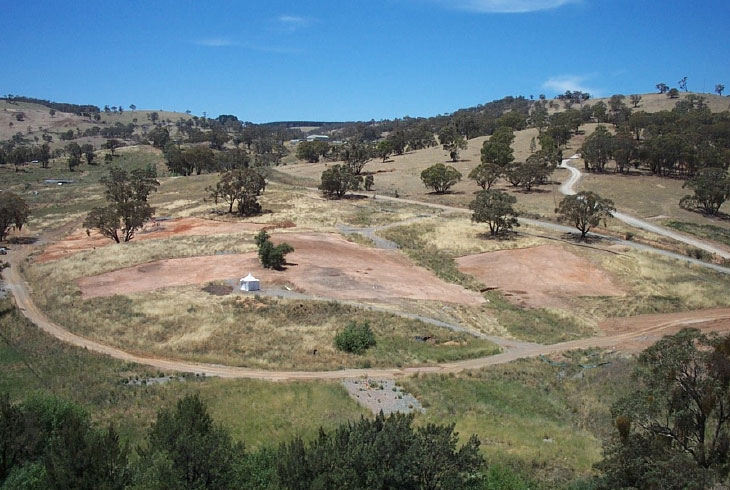 This view of the site of Cadia Village during excavations in 2002 is from a similar standpoint to historical photographs. A section of Old Cadia Road skirts the Village in the foreground, while the current mine road follows the alignment of Chilcott Street, the main street of the Village in the twentieth century. Going up the hill on the right is a modern mine and farm access road.

The photograph also shows the extent of archaeological excavation, with large areas opened up. The tent in the foreground is on the earlier mine exploration platform, the site of the Bon Accord Hotel (Edward Higginbotham. 2002).