A matter of Faith – the role of the Church at Cadia

The onset of the Industrial Revolution in the United Kingdom caused a major change in the religious beliefs of the country. The Church of England was strongly associated with the new middle classes – the factory and mill owners, the ironmasters and the mining adventurers. The working population was alienated by exploitation and the dangerous working conditions to which they were exposed. Instead they sought relief from the travelling Methodist preachers, like John Wesley (1703-1791), his brother, Charles Wesley (1707-1788) and others.

In industrial centres like Manchester and Glasgow, various forms of non-conforming or dissenting religion became popular. Cornwall in particular responded to the preaching of Wesley after his first visit in 1743. The simple Christian message of salvation appealed to the miners, when daily exposed to the dangers of the mine and the ever present threat of starvation, if unemployed.

By 1850 the vicar of Crowan, Cornwall, conceded that the Church of England had lost the people; “the religion of the mass is become Wesleyan Methodism.” Over 700 chapels survive in Cornwall and more than 80 percent are Methodist in origin.

When they migrated to Australia, the Cornish brought their Methodism with them, or at least its various offshoots, including the Bible Christians or Primitive Methodists. Their chapels became a distinct feature of places like Burra and Moonta in South Australia. While none of these building survives at Cadia, the Methodist tradition was nonetheless strong within the mining community.

Annie Parish (nee Holman) remembered that there were only two churches in Cadia, the Church of England and the Methodist Church. The Methodist Chapel had opened at Cadia in 1868, though religious services were held for that denomination as early as 1861.

As in the United Kingdom, the Church of England attracted the mining elite, while Methodism attracted the working person. The original School Council reveals this difference. John P Christoe, Josiah Holman, William Smyth Blood, George Rycroft and James Buckley represented the Anglicans. The sole Wesleyan Methodist was John Jenkin, and there were two “Other Denominations”, Eynon Deer and Thomas Hussey. Joshua Hunt, teamster, was the only Roman Catholic on the Board.

Cadia was a regular stop on the Wesleyan Methodist preaching circuit plan of August-October 1864. Preachers for Cadia then included F, Thomas and W. Cock. Many years later, J. A. Waddell, a junior minister in the district in the early 1870s, wrote that, “At the Icely and Cadia copper-mines glorious revivals of religion took place when over 100 conversions were recorded, including several Roman Catholics”. One of the more notable lay preachers of the time was John Trathen of Cadia.

In April 1891, the census recorded that the Church of England at Cadia was a more finished building constructed of “sawn planks”.  The Methodist Chapel on the other hand was built of “slabs”. 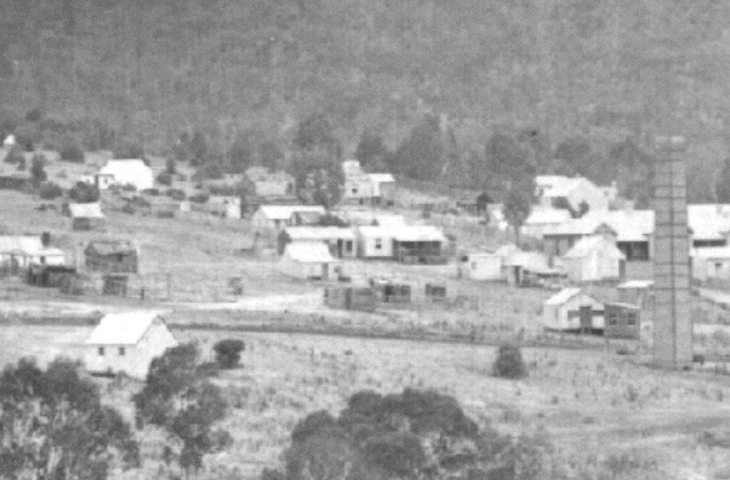 The Anglican Church at Cadia is shown in the left foreground of this photograph of the Village taken between 1912 and 1914. The chimney of the disused Copper Smelter No. 2 is on the right.