While the company encouraged miners to bring their families, the stability of the family unit and the community as a whole was dependent on the viability of the individual copper mine, the costs of extraction, transport and the price of copper. With the closure of the mine in November 1867, it is the departure of the leading figures that best illustrates the mobility demanded of the copper miners, who were forced to travel from major find to major find.

By April 1867, more than six months before the closure of the mine, John Penrose Christoe had left Cadia with his family and was appointed smelter and assayer of the Peak Downs Copper Mine in Queensland. He was replaced as smelter manager by Leyshon Jones in 1869, but continued as assayer. Leyshon Jones had an impressive background in smelting at both Burra and Kapunda. He had also supervised the construction of the massive smelters at Wallaroo, South Australia. Christoe leased the Peak Downs Mine in 1879, but by late 1881 was declared bankrupt.

Dr. Matthew Blood also returned to Kapunda, South Australia, probably around the same time as Christoe, his son-in-law, had left for Queensland. William Smyth Blood has left his business by July 1867, but returned to Cadia in 1870 to marry Emily Louisa Holman, second child of Josiah and Elizabeth Holman.

Josiah Holman himself left his family at Cadia to work at the Icely Copper Mines, near Guyong, until returning to Cadia to take out a lease on the mine from 1870 to late 1871. About 1872, Josiah Holman, following in the footsteps of Christoe, went to Queensland to report on the company’s Peak Downs Copper Mine, and to draw a plan of the underground workings. On the basis of his report, the previous mine captain resigned and Holman was appointed in his place late in 1873. By rigorous care in following profitable leads, Holman was able to convert the company’s losses into a modest profit by the end of 1875. Early in 1876, Holman resigned from the Peak Downs post. There was no work in copper mining at Cadia until his return in 1876.

Many of the other Cornish miners at Cadia attempted to follow Holman’s example: the men moved away to work, but the wives and children stayed at Cadia, so that the children could still receive an education. As Holman put it, “the comparatively large number of residents now at Cadia, are holding on to it with the hope of an early resumption of the works and in which I share their hopes”. By April 1869 the situation proved hopeless and when some of the miners got work at the Icely Copper Mine, they took their families with them.

Greville’s Post Office Directory of 1872 recorded those who still remained at Cadia. In this directory, the area defined as “Cadia” included the Four Mile Creek diggings, plus Springfield, as well as the gold mines at Burnt Yards to the south.  A number of familiar names from Cadia were seen at Burnt Yards in 1872, such as smelter William Hussey, teamster Thomas Cluff, and miner, William Northey. Miners still at Cadia included John Aspinall, John Bice, Stephen Webb, Thomas Faull, Randle Crewe, Robert Costello, Francis Jenkins and Edward Skelly. Teamster Charles Bryant was still there, as was the butcher James Burfitt, storekeepers John Trathen and Robert Roberts and the hotelkeeper Humphrey Hicks.

In April 1873, the school inspector reported that, ‘The miners have all left the place.” The Cornish domination of the community was now broken and was never again restored.

During the period from the 1870s to the turn of the century, a small local population was sustained on the small scale gold mining and brief periods of copper mining. The Village only revived during the second mining boom between 1904 and 1928. 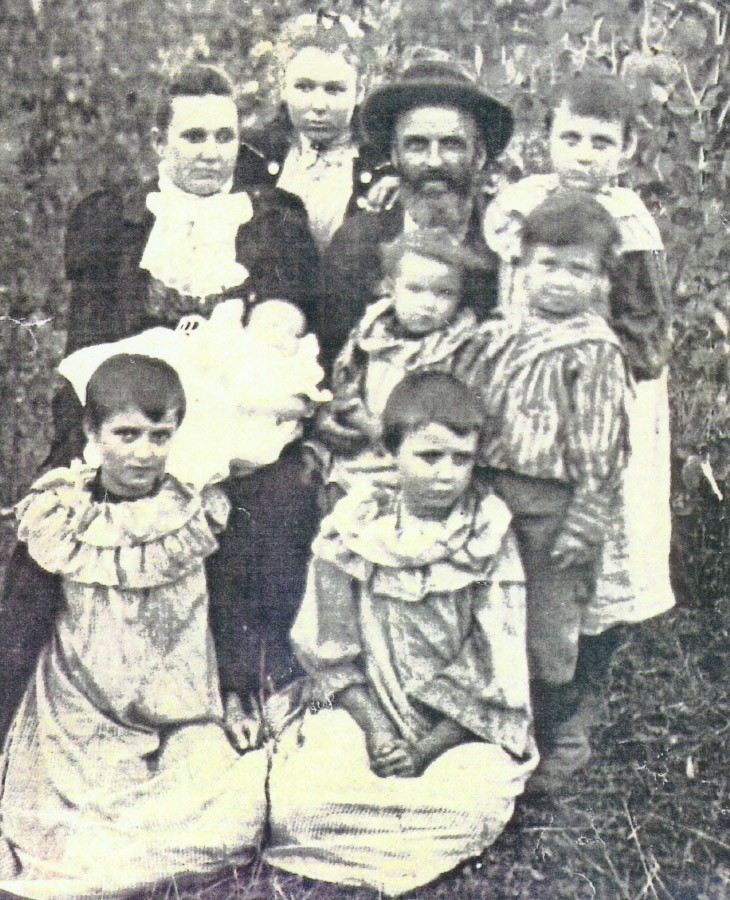 William and Harriet Daniel, with seven of their eight children, at Cadia.
Left to right, Back: Harriet, Ada, William and Emily.
Middle row: Baby Charlotte, Edith and William.
Front row: Grace and Blanche (Isaac deceased.)
Harriet died from tuberculosis a year after this photo was taken on 8 May 1902 and is buried at the Cadia Cemetery.