During the period from the 1870s to the turn of the century, the local population was largely sustained on the small-scale gold mining and brief periods of copper mining, but it was not on a scale that sustained a population similar to the 1860s.

Between 9 May 1870 and 20 September 1871, Josiah Holman leased the Cadia mines from the Scottish Australian Mining Company. A report in the Australian Town and Country Journal described Holman’s attempts to reopen the mine and to continue the smelting of ores.

During this lease, Josiah Holman also worked a shaft at Holman’s Reef, located at the south end of Cadia Village. Others were involved in digging at the Western Reefs, which were thought to be outside the Cadia Properties until the survey for the new fence in 1880.

After this attempt to keep the mine working, Josiah Holman left for the Company’s copper mine at Rockhampton, Queensland. While there was no copper mining activity at Cadia between September 1871 until his return in 1876, others had successfully opened up Trathen’s Auriferous Vein at East Cadia, where a gold nugget of 39 ounces was found. These workings date from 1873 to 1877, but were attended without further success.

Under directions from the Scottish Australian Mining Company to work the mines at Cadia, but only on the basis “to make the return equal to expenditure”, Holman again used the White Engine from August 1876 to September 1878, producing 1,020 tons of ores with nearly 11% copper content. The balancing of the books was not achieved, because of the poor prices for copper on the international market. The results of goldmining likewise displeased the directors.

From 1880 onwards Josiah Holman again became a yearly tenant of the mine, maintaining all the plant in good order. The old copper ore crushing plant (presumably at the Engine House) was partly converted to testing for gold in November 1882.

In 1883 the equipment for obtaining gold was extended with an overshot waterwheel to be used in place of steam power, if sufficient water was available. The principal areas for gold sluicing were located above the East Cadia workings (Trathen’s Reef) and at West Cadia, between the North and South Sections, in both of which areas substantial remains of sluicing still survive.

In spite of the low production rates, Holman rebuilt a copper furnace in 1884, with the intention of smelting the ores at hand (Furnace 6 at Copper Smelter No. 1).

By 1887 the Company had come to the view that the Great Iron Lode (Iron Duke) was the likely location of the source of the alluvial gold. Captain Holman now concentrated his miners on this area, recovering small quantities of gold. Although the aim had been to find the mother lode of gold, instead the company found new reserves of copper. Ores were smelted in 1888 and Captain Holman put Copper Smelter No. 1 to final use in late 1891. These furnaces had served the company well since 1861-1862.

By early 1893 Josiah Holman was simply occupying the house and farm at Cadia, paying a minimal rent and receiving no remuneration from the Company. Holman died on 18 September 1893.

Mr. T. Croudace is first mentioned as the new mine manager in the company report of December 1892.

Between 1891 and 1897, there was no activity of consequence at Cadia. In 1897 the Scottish Australian Mining Company tried to reopen the copper resources previously exploited by Holman in 1887-1891, but the work was brought to a halt by legal action over a disputed mining claim. Although the case “Zobel vs. Croudace” was resolved in the company’s favour in June 1899, the local community resented the role of the Scottish Australian Mining Company in prohibiting other members of the community from earning a living by mining.

The physical evidence for gold mining at Cadia from 1870 to 1900 includes mine shafts, two water races, remains of two stamper batteries as well as sluicing. One water race served the west side of Cadiangullong Creek, ending at a stamper battery. The other served the workings on Trathen’s Reef, commencing on Rodds Creek. The water races and workings are clearly shown on the 1881 plan of the Cadia Properties.

The site of the stamper battery in Cadia Village may be the one that was powered by a waterwheel in 1883.

Evidence for sluicing for gold is found at East Cadia and between the old North and South Section Mines. 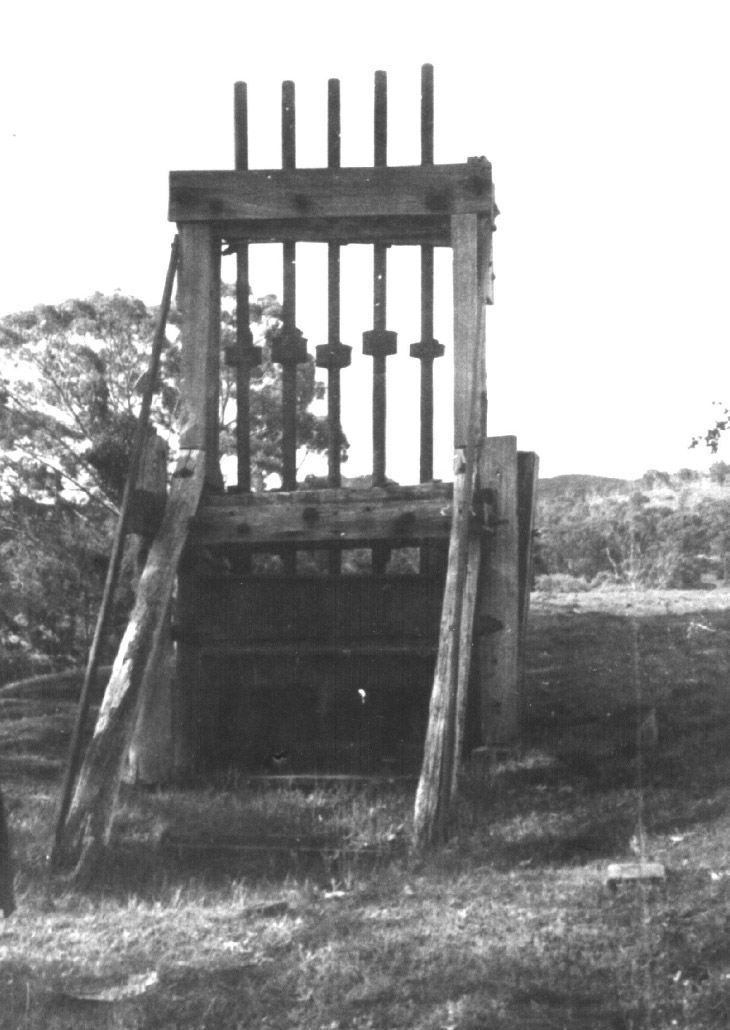 This historical photograph of the five-head stamper battery on the east bank of Cadiangullong Creek in Cadia Village shows the structure was substantially intact. Only remnants survived in 2000, with the mortar box being used to block the top of a shaft on Holman’s Reef nearby.